Friday to Saturday, 1th of October. Antoine, a cute nineteen year old first semester, lived just for some weeks in a cosy small student flat just in the centre of Reims. We had nice talk when I arrived in the night, especially about our couchsurfing experiences, music (he is playing the guitar, too), psychology (his studying topic) and education system in France in general. It was relaxed and open atmosphere, and when we went to bed Antoine offered me his bed to sleep. He himself would sleep on a sleeping mat in then kitchen. But as his bed was a fold-out couch and therefore big enough for two people I invited him to share the place with me. 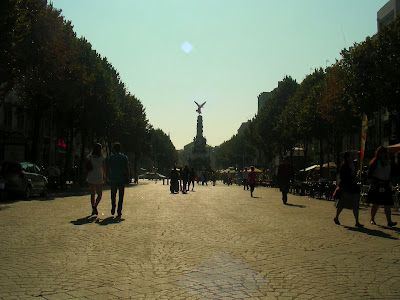 Next day Antoine showed me around somewhat, as the city was still new to him, too. I really like this city. It was a fantastic sunny day and the atmosphere was very relaxed. The Place Drouet d'Erlon, that is just in the next street of Antoine home, reminded me a lot of Victory Square in Temeswar (Romania), where Klaus and I had been some years before. It contains many lively restaurants and bars, as well as several attractive statues and fountains, my favourite one is shown at the photo above. During the summer it fills with people sitting outside the many cafés enjoying the summer sun. And they have psychedelic buses in this city… 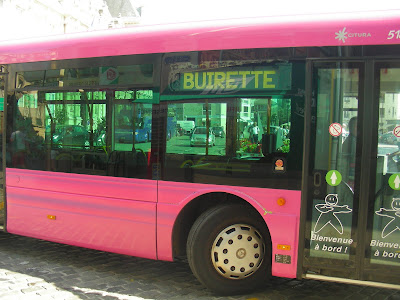 In the afternoon Antoine did some work for university (he's still very engaged at the moment…), so I went to an Internet café to go on with my blog and organize my remaining stages and couchsurfing hosts. In the evening we met some of his friends and went out for a beer. Because Reims is a student city most night life happens during the week, on weekends all the students go home to visit their parents. This phenomenon was new to me and still seems a little bit weird.

Being with his friends was curious. Since my staying with Antoine and his flat mates in Caen I'm used to the French way of welcoming and biting farewell other people, it's no longer weird to kiss the air – nevertheless it's still a little bit strange that this convention on the one hand seems to be more personal as the German handshaking but on the other had it's much more difficult to break through and give the other one a real hug. So on first impression French people feel more close but at the same time they make sure to keep some distance. I don't know if they are aware of this, maybe they just can't imagine to act different. The friends of Antione in Reims were young nice man, but they weren't able or didn't have the heart to speak in English. So most of the time the three guys talked and had fun and then Antoine translated to me in three sentences the topic of the last five minutes. In this sense the first evening was much more nicer and personal. Once we played tabletop football, but the French table are totally different from the ones I'm used to in Germany. So I lost very bad. No fun. 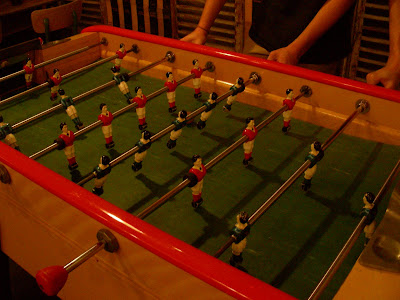 Another thing I recognised and couldn't understand was the fact, that French people didn't seem to be aware of pollution control. As one example of many my fellows (and also the other people in the pub) drank their beer out of a plastic cup. I myself had ordered a Guinness and because the pub had only bottles they asked if I'm okay with the bottle, so I took the chance to ask for a glass – and I got one with a very nice unusual shape. Because I was curious I asked Antoine about this unnecessary production of waste, and first he seemed to understand the problem as he talked about French mentality who didn't want to change behaviour to change reality. But the more I focussed on the question, why he didn't drank his beer from a glass, the more he didn't seem to understand and ended up in the phrase that they always used to do so. Later in the discussion he assumed that the pub probably had charged me extra for having a glass (I had paid more than the others), so I had a nice chat with the people behind the bar, who assured to be glad to give people a glass – surely without any extra charging – if they would like to have one. I'm afraid French people are far away to think about all the little changes in behaviour to save nature which are so usual in Germany.
Eingestellt von Sanne Grabisch um 9:29 PM