Monday, 3th of October. I stayed for two nights at Bens place. Ben lives in a very nice house. When arriving in the night we mainly said hello, and after a shower and a meal I went to bed. But next day, a Monday, we spend the whole day together, starting with a very intense talk. 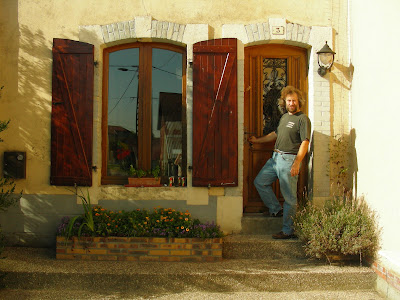 Ben told, he quitted work three years ago, so I became sensitive and wanted to hear more. The meaning of work in people's life was and still is an important topic for me. Ben was so relaxed when talking about a different value system: staying at home gives him and also his family – he has a sixteen year old daughter and a wife – so much more freedom. They now have less money but they also need less. There was no need to go on doing things he didn't want to do. To me it's still new, that one can change priorities. I still have all these „You are what you own “ phrases in my head (what I never believed but what seem to infect me more then I was aware). To me it was kind of apparentness to met someone who's happy with not working after I found out about my bequeathed inferiority complex. It's probably possible to do so without feeling guilty.

I told Ben about the changing in my life – quitting my job at university and maybe quitting work at all. When telling all the aspects why I no longer felt comfortable in doing my job I was a little bit shocked because it's so much what came together that it's actually no wonder I'm not able to go on. Looking from this side on the facts was kind of new, usually I prone to think that's my fault to be over-sensitive and not able to be factual and distance myself. It's still hard not to judge myself but take my feelings as a healthy reaction.

It was a very good talk, but after it I felt pretty exhausted and talking came to an end for now. It was a bright sunshiny day. Later we drove by car to Verdun and I got a feeling about the area I had cycled through in the night. Ben told a lot about history especially the battles in the first and second world war. We visited Douaumont ossuary close to Verdun, a memorial containing the remains of soldiers who died on the battlefield during the Battle of Verdun in first World War. In front of the monument lies the largest single French military cemetery of the first world war, it contains 16,142 graves. 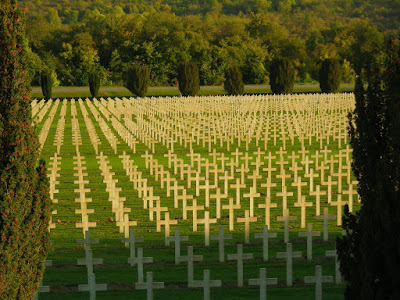 Some years ago there were made graves for the Muslims which now face to Mecca. But the most curious experience was that there were lot of crosses pulled up the ground and lying there like a trenched field. Because the crosses are made of concrete they have to rebuild regularly. 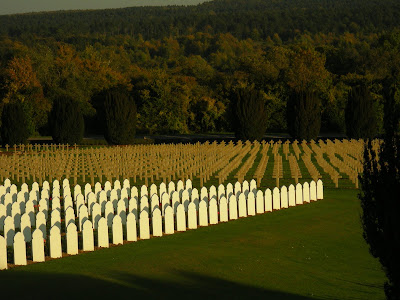 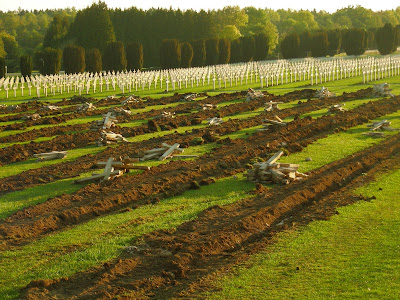 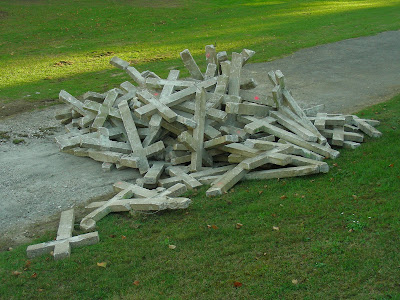 Ben also showed me the little windows behind the ossuary, placed under the big red ones which symbolize all the blood. Beneath you can see all the human bones, the remains of both French and German soldiers who died on the battlefield. Some of the cave rooms, each representing an area, were full to the top.
Eingestellt von Sanne Grabisch um 5:37 PM