The last (so called) stage

Tuesday, 6th of October. This morning there was a silent knocking on my door, hardly noticeable. When I boot on my lended computer to look for the time it was actually 8:18 A.M. – so I really had tu hurry, because my train would depart at 9:07 A.M. from 10 kilometres afar Nennig. Fast packing, fast symbolic breakfast… I angled my brakes more wide, so the wheel didn't hit so bad. My ability to slowdown wasn't so good now, but still working. And I also swapped the package of the panniers, so it was less weight on the carrier's broken side. Both helped. 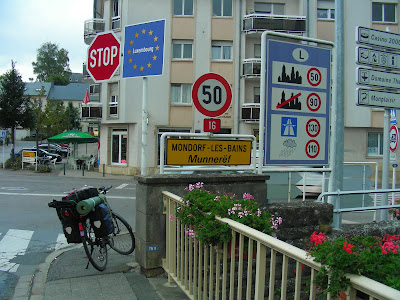 I went on hurrying when I was on my bike, and surely it was uphill for a long time – but the outlook when being on top and also the high-angle downhill was great, and at this time I became more confident to catch the time. When I passed the German border – second border this day after first passing from France to Luxembourg – it was stormy and I felt some raindrops, so welcome back home! – but it were actually just this few drops. Nevertheless it was a cloudy and windy day. 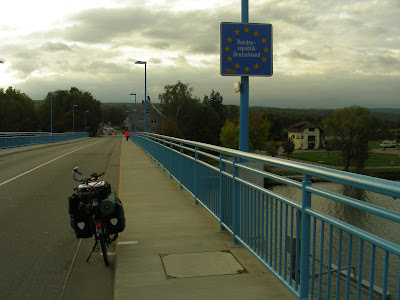 As the station in Nennig was a very small one, there wasn't any lift but even no other help for people on wheels. I was quite impressed of myself, that I was able to shoulder my packed bike without any difficulty. 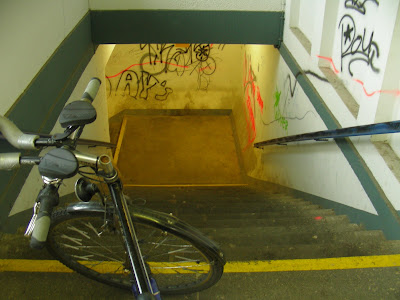 When I bought my ticket at the vending machine I was wondering, why it costed more than the railway website had informed me before. And when having a look at the itinerary it was also another route with less change but it would keep me via Cologne. I was wondering but just thinking this could maybe caused of the fact that I mentioned my bike when I did the internet search, so probably the vending machine had made his decision on shorter connecting times (but somehow in both cases I would arrive nearly at the same time at my destination – as I said, I didn't really thought about it). I needed the help of a train conductor to see my mistake: I had bought a ticket to Dortmund instead of Darmstadt, where I wanted to visit some friends and meet Klaus on Friday to visit the birthday party of his cousin. In Trier – first connecting station for both goals, so till then I was never the less in the right train – I had to go to the counter. Fortunately I had 25 minutes transfer time (but according to the line in front of the counter, I also needed this time). Surprisingly the Deutsche Bahn cancelled my old ticket and gave me the right one without any extra charge, so in the end I got some money back.

It was curious to sit in a German train. The people around me appeared to be grouchy, crabby, mopish. It's strange how prejudices and generalisation are working. I suppose half of my impression was caused by the fact, that I wasn't able to see my home country's people from an open minded curious view. In fact it wasn't that bad.

I visited some friends in Darmstadt and stayed overnight. Nice guitar session, interesting talks. Exiting sense of self, the changed me in a familiar context. Next day I met Klaus and we visited the birthday party of his cousin together. Great meal and many lovely people and all of them so fascinated about what I did. On Sunday another of Klaus' cousins who also had joined the party took us home with his car.

Being back is weird. Nice but very different. Live is easier when the only thing you have to do is cycling. Summer is definitely gone now. Things have changed. But I still contend with the same things I did before I went on my tour. I'm still learning to become free.